During a recent Heat Transfer Simulations webinar we demonstrated some good examples using “everyday life” type scenarios. Heat transfer occurs in many situations indeed: potatoes cooking in the microwave, hot coffee in a cup, and on the beach, with solar radiation. And most of us have at some point boiled water to make pasta for dinner. Heat transfer is at work then too.

Let’s consider this pot of boiling water for a moment. This turns out to be a very good example of “boiling flow”. When modeling this we see a liquid-to-gas phase transition that begins when the temperature of the liquid is raised above its saturation temperature. In this case we apply an external heat flux (the flame) to a solid surface (the pot), which is in contact with the liquid (the water). 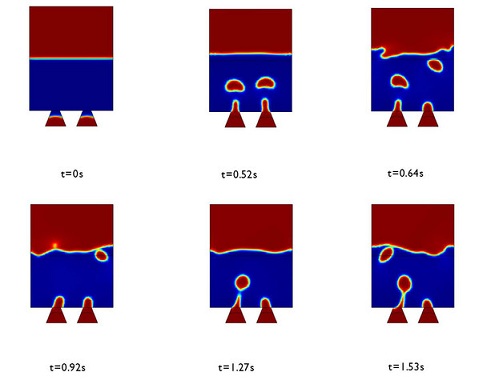 The boiling process as a result of a heated surface can be described by three different regimes: nucleate, transition, and film. It is strictly correlated to the excess temperature (i.e., the difference between the solid surface and the saturation temperature of the liquid) and the magnitude of the heat flux applied to the surface. Here’s an animated model of boiling water as well.